Last week I spent a few days over in Brisbane. I thought I’d put together a few observations about the rail network from while I was there.

It’s not how heavy your rail is, it’s how you use it

Brisbane airport shares a lot of similarities with Auckland in that it sees a similar number of people annually (23 million vs 21 million) and has strong growth forecasts. The airport also happened to be a similar distance away from the existing rail network as Auckland airport is from Puhinui and in 2001 a privately owned rail line, but fully integrated into the rest of the network, opened to serve the airport – with travellers paying a special airport premium to use.

Back in Auckland, far too often discussion on improving public transport to the airport has focused on the mode and not how useful it is. Brisbane is a useful example of how it’s not how heavy your rail is, it’s how you use it that matters. That’s because how long it will take you to get through an airport is generally not something you can plan for, especially as you wait for your baggage and then to get through immigration and customs.

For public transport to be useful it needs to be frequent and this is where Brisbane’s rail connection falls over because off-peak and on weekends services only run every 30 minutes.

As fate would have it, we arrived on a weekend and just as we exited the secure area we could see a train pulling up at the platform, leaving us with a 30 minute wait for the next one.

Of course not only is there a long wait but as mentioned there’s also a premium fare to pay of AU$19 if using a Go Card (the equivalent of HOP).

Brisbane use a few different generations of trains. The older few generations, like Auckland’s trains, are 3-car trains about the same length as our but operate paired together to form a six-car train. But notably their newest generation of train, which started entering service in 2017 and with some still under construction, are all permanent 6-car trains and are designed to be expanded to 9-cars in future. They also required a new maintenance facility.

We’ve currently got 57 3-car electric trains with 15 more on the way and plans envisage a further 21 to cope with the demand after the City Rail Link opens. But I wonder if in the future we will look to do something similar. 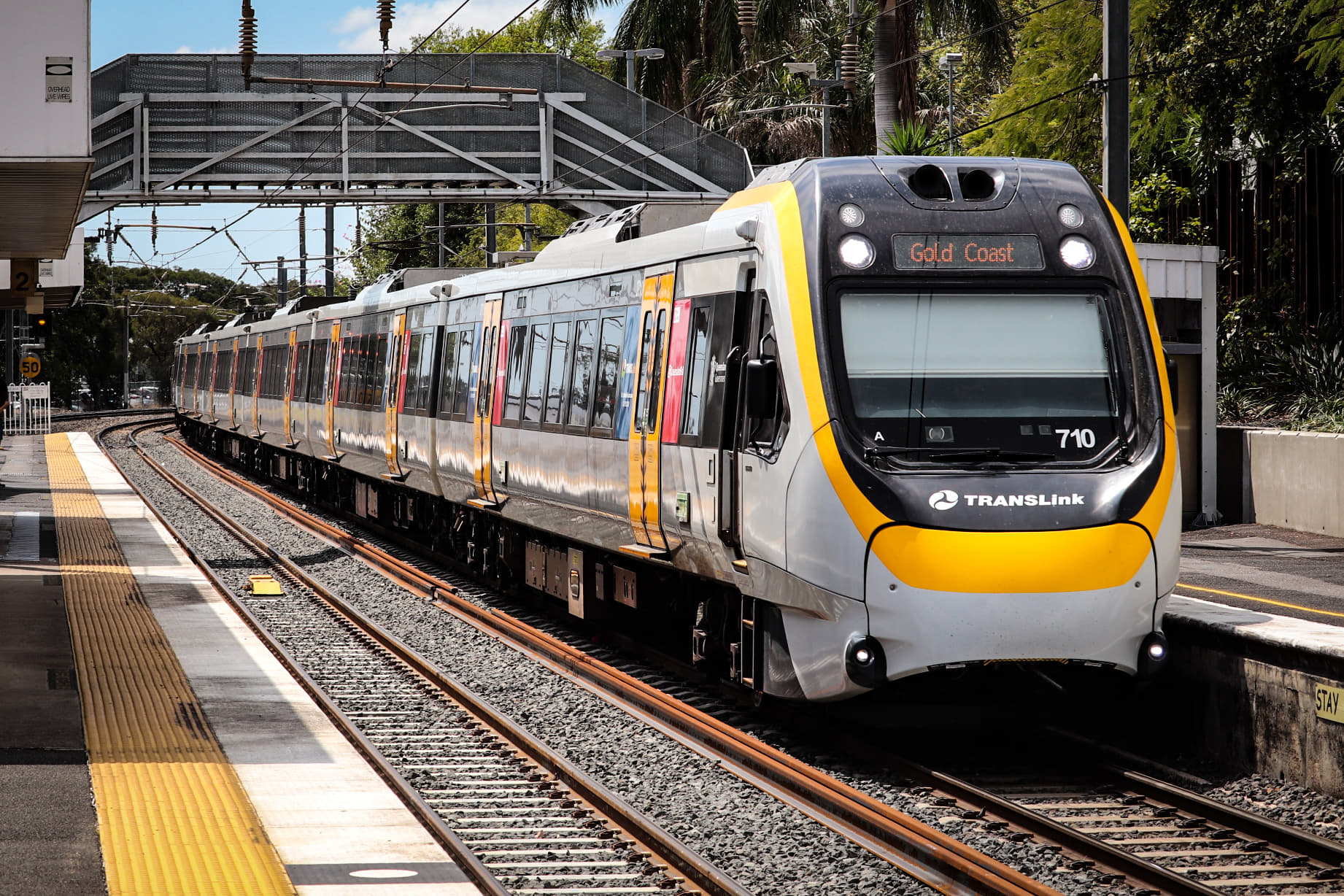 One of my big bug-bears is about how we operate our trains services is our painfully slow dwell times that can take close to a minute per station. While some of that is for technical reasons, such as waiting for the platform on the middle car to extend/retract, a decent chunk of time is wasted with how train managers operate the doors. At a high level their process seems to be:

Brisbane, like many other cities that have retained train managers, skip step three by having the train manager in the rear driving cab. From there they can lean out the door (or a window) to check all passenger doors have closed and signal the driver. Some other cities solve this by linking up CCTV looking at the platform to monitors positioned for the TM to see, or even have platform staff signal the TM. Implementing something like this could potentially save up to a few minutes per trip.

Brisbane has a lot more rail resource than Auckland but has similar issues in that the network through the city is at capacity and preventing more services from being able to run. We were staying in an apartment in South Brisbane from which I could see the station and from there I could see trains arriving in each direction every few minutes.

To address this Brisbane currently digging a new AU$5.4 billion rail line though the city in a project called Cross River Rail. It is described as:

Cross River Rail is a 10.2km rail line from Dutton Park to Bowen Hills, which includes 5.9 kilometres of twin tunnels under the Brisbane River and Brisbane CBD.

I took a look at some of the work being done for the Albert St station where trains will be 31m underground (similar to the Karangahape Rd station). Because the route isn’t dug as a cut and cover tunnel the works (so far) feel almost like pinhole surgery in comparison to the open heart variety we’ve seen on our Albert St.

Overall the project is very similar to the City Rail Link in Auckland, both are being built to address capacity issues, both add a few new and other upgraded stations to the network, both are designed to cater to 9-car trains and both are due to open in 2024. It will be interesting to see what impact they both have on their respective rail networks.

For one of our days we decided to take a trip down to the Gold Coast by train and I couldn’t help but think of how similar it could be to services between Auckland and Hamilton if we implemented it in a similar way.

We boarded a train at South Brisbane and between there and Beenleigh (the end of the red line on the map above) the train only stops four stations. This is helped by about 20km of 3rd main from South Brisbane to Kuraby. As such, the train travelled this approximately 38km in just about 34 minutes, an average of 67km/h. From Beenleigh there are just two stations in the 28km to Helensvale and combined with a straighter and faster alignment which allows the trains to reach 140km/h the train takes just 17 minutes for an average of about 100km/h.

If we had something similar between Auckland and Hamilton with Auckland to Papakura averaging say 65km/h, thanks to a 3rd/4th main, and Papakura to Hamilton averaging 100km/h then it would take just over 1½ hours to get between Britomart and Hamilton. That feels like something that would be quite competitive with driving.

One of the things I was interested to see was the station at Helensvale which is not only a train station but has a bus interchange on one side and the end of Gold Coast light rail line on the other.

There’s quite a different style between the older train station and the more recent light rail station but the integration between the two is easy and works well.

One thing you do have to be careful of is that the light rail runs every 7.5 minutes but the trains only travel in each direction every half hour so the transfer is easy one way but more precarious the other – although luckily we managed to time it well.

Another thing to note, you can see three yellow posts at the end of the platform, they’re tag posts and there’s three more on the other side of the canopy so six in total. Contrast that to Auckland Transport often only having a single tag post at each entrance to a station.

Finally, Brisbane and South East Queensland(Sunshine coast down to Gold Coast) is one of the cities/areas I try to collect data on for comparison given there are a lot of similarities with Auckland.

Overall SEQ as a whole does around 190 million boardings annually with the bulk of that on buses with over 117m trips, trains do 55m, light rail does just under 11m and ferries 6.6m.

From what I can tell within those figures, trips within Brisbane itself are about 152 million. Bus and train numbers have been starting to pick up again recently but they’re still below what they once were despite there being significant growth over the last decade. This means the number of trips taken on PT per capita has fallen from around 86 a decade ago to below 70 now. Over the same period Auckland has increased from about 44 to 62.

Edit: one aspect to all of this I forgot to mention is that the system is much more heavily subsidised than Auckland’s is. On average, farebox recovery for the PT system, the amount of costs recovered by passenger fares, is just 21%, less than half of what it is in Auckland.

There was plenty of other stuff I could talk about but I think that will do for this post.