In last week’s post I waded through some of the political mud that was thrown about in response to the recommendation to consider road pricing in Auckland. I concluded there’s not many good reasons to avoid talking about road pricing, even if we don’t need to rush.

In doing so, however, I noticed that much of the discussion on road pricing occurs at what my friend Jarrett Walker calls “low altitude“. By this I mean the discussions tend to quickly descend into debates over things like the level of pricing, payment systems, and what to do with revenue. While I acknowledge these are important questions, they are also questions of detail: They relate to the “how” rather than the “why“. In my experience a good understanding of “why” helps answer the “how”.

In this post I want to look at two ways in which road pricing generate economic benefits. It’s a story of two brilliant people: One named Pigou and one named Vickrey …

If you happen to search for “economics of road pricing”, then it’s likely something similar to the following image will pop up on your screen (source). In a nutshell, this graph illustrates the static efficiencies generated by road pricing. 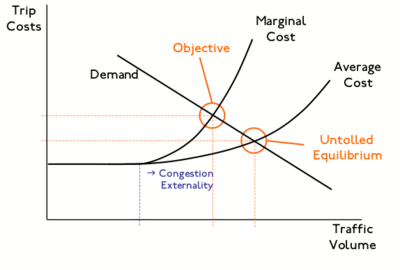 Let’s walk through the details a bit. First, the graph measures traffic volumes on the horizontal axis and trip costs on the vertical axis.

The line marked “Demand” slopes down: As costs fall, traffic volumes rise. That’s sensible: If it is cheaper to travel by car, then more people drive – and vice versa. Now consider the ski-jump shaped curve labelled “average cost”. This shows the average cost of driving from the perspective of drivers; it curves upwards because your travel-time will increase as traffic volumes increase. Now look at the ski jump shaped curve labelled “marginal cost”, which refers to the social cost of each additional vehicle trip. The reason it curves upwards faster than the average cost is because each new car causes additional delays to all existing users. These delays are not reflected in an individual’s decisions, i.e. they are external.

Two important points are also marked on the graph; these are 1) the “Untolled equilbrium” and 2) the (somewhat vaguely named) “Objective”. The untolled equilibrium is where drivers don’t pay the costs of the delays they cause, i.e. it represents the status quo. This point is associated with higher traffic volumes and lower costs than the point marked “Objective”. The latter includes the costs of delays caused to others, and so is associated with lower traffic volumes.

So where do the benefits from road pricing arise? Well, because congestion is an external cost imposed on other people, more people choose to drive than is socially optimal. In this context, internalising congestion costs by way of a toll, a’ la road pricing, reduces demand to a more efficient level, i.e. society as a whole is better off. I should note at this point that congestion is but one externality associated with driving. Noise, air pollution, and accidents are also examples of externalities that drivers should probably pay for. The concept of internalising externalities from traffic congestion was first articulated by an English chap called Pigou, hence the moniker “Pigouvian pricing”.

At this point, many people close the road pricing story book, turn to their friends and family and ask: So shall we price the poor beggars off the roads then? To which the answer is usually “no”, or at best an uncomfortable “maybe”. But we’ll be better off, you might exclaim. Only to be chased out of town by angry people with pitchforks.

Thankfully, the road pricing storybook has another, often forgotten, chapter. Look carefully at the horizontal axis of the above figure, which shows traffic volumes as a function of price, and price only. Can you think of another variable that predictably affects traffic demands and the congestion arising therefrom? Like perhaps time of day? Hmm …

2. Dynamic efficiencies – Get onboard the Vickrey express

The image below is not one that’s easy to find online. I looked and couldn’t find any. Instead, it’s taken directly from my lecture slides (Acknowledgement: This guy).

Believe it or not, this psychedelic rectangle is the so-called “bottleneck model”. The vertical axis measures cost, whereas the horizontal axis measures clock time. The point labelled t* is the preferred arrival time at your destination, say 8am at work. The points tq and tq’ represent the start and end of the peak period respectively, say 6-9am, during which time queues form in front of a “bottleneck”, i.e. a capacity constraint. All users are the same (homogenous).

The bottleneck model was developed by Vickrey. One of his key insights is that all travelers face the same cost; the only difference is how costs are split between 1) schedule delay and 2) queuing delay. Another way to think about it: You can either 1) travel early/late and face a shorter queue (but arrive at work early/late) or 2) leave home at the time that gets you to work at the preferred time t* (but sit in queues on your way). Vickrey shows that in equilibrium, options 1 and 2 cost the same (hence why the top of the rectangle, which represents the sum of schedule delay and queuing delay, is flat).

The two green triangles in the above figure represents schedule delay; this is the cost associated with arriving at your destination before or after the preferred time t*. Note that the two green triangles are different shapes, because people generally place a higher value on arriving later than arriving early (NB: This doesn’t change the story). The red area represents the cost of time spent queuing, or “congestion”; it increases from 0 (at tq) to c0 (at t*) and then declines to 0 again (at tq’).

Vickrey showed the optimal toll at any point in time is equal to the length of the vertical red line. That is, if you want to maximise people’s welfare, then you would set a time-varying toll that started off at zero at t = tq and increased to c0 at t*, before decreasing to zero again by tq. This toll would encourage people to leave later, and therefore avoid queues forming early in the morning. In essence, this makes use of underutilised capacity that exists later in the morning; it is a dynamic efficiency.

How does charging a toll equivalent to the cost of queuing delays leave people better off? Well, for the simple reason that time spent queuing (red area) has been “monetized. And unlike time spent in traffic, monetary revenue from tolls can be spent on other things, say lower taxes or increased government investment (depending on the colour of your political pajamas). Basically, road pricing takes wasted time and turns it into something useful (toll revenue).

One point to emphasise; These so-called “dynamic efficiencies” are achieved by changes in departure times (specifically leaving home later), not changes in demand. Moreover, the cost people face is the same with or without the toll. All the latter does is take a time cost and turn it into a monetary cost. The Vickrey model is in this respect very different from the Pigouvian model discussed in the previous section, where benefits arose from suppressing demand.

The Pigouvian model focuses on demand. It concludes that a fixed toll should be used to internalise congestion externalities and price some drivers off the road. In contrast, Vickrey’s model argues that a time-varying toll can be used to monetize time spent queuing. The toll encourages people to change departure times, eliminating queues, and generating revenue that can be used for other things. This is as close to a free lunch as you tend to get in economic terms.

Discussions on road pricing often ignore dynamic efficiencies. I think this is unfortunate because I think they are potentially the largest source of benefits. Consider the productivity benefits to commercial vehicles from eliminating queues. Faster and more reliable travel-times would mean that commercial vehicles, and their drivers, could get through more work every day. Think of all the times your tradespeople or deliveries have been delayed en route. It’s frustrating for them, as well as you, but ultimately it’s you and I who pay the price of those delays: Inefficiencies arising from congestion are factored into the price of almost everything we buy.

Real life is obviously more complicated than these economic models imply; real people are not identical and actual tolls are not able to vary by infinitesimal amounts. In response to these realities, some modern road pricing schemes, such as that implemented in Stockholm, blend a fixed toll (a’ la Pigou) with a time-varying toll (a’ la Vickrey). Hybrid road pricing schemes like Stockholm’s have struck a reasonable balance between pricing some drivers off the road, while also encouraging others to adjust their departure times. You can read more about the history and politics of Stockholm’s scheme here.

I want to finish with a final comment on revenue recycling, because I think it’s essential to the potential viability of any road pricing scheme and is something that I will look to cover in future posts. One option would be to use toll revenues generated by road pricing to make a direct, annual per capita payment to Auckland households. This might be similar to the electricity trust payment paid to some households, and would ensure that everyone faced the marginal costs of travelling at peak times – with some money paid back later. A second option would be to use the money to reduce rates. For example, revenue from road pricing could be applied to reduce or eliminate the uniform annual general charge (UAGC). Let me know if you think of other options.

Anyway, that’s more than enough poppycock from me. Keen to hear what others think, and if there are particular aspects of road pricing that you’d like us to research, then please let us know in the comments and we’ll see if we can build it into future posts.